Exclusive unremovable clasp for Autism medical bracelets helps keep your special needs and non-verbal loved one safe when they wander.

Why Unremovable is Safer

ID Tag example:
JASON JACKSON
AUTISM-NON VERBAL
DIABETES 1, NO SOY
ICE8880002222
Always include an "ICE" number (In Case of Emergency) of a cell phone for someone that can be reached for retrieval, or be made aware of a medical emergency.
See these guides for medical Abbreviations and for Beginners and How to Size a medical bracelet correctly. It's a good way to get started. 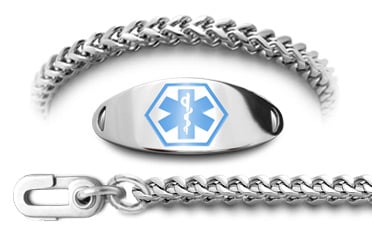 Special design for safety: Our unique unremovable clasp and a permanently attached ring to the ID tag keeps loved ones safer than ordinary lobster clasps. Experience proves that this unremovable clasp design, requiring 2 hands to open, is more effective to promote a safe return for non verbal and special needs loved ones.
How to Close the Unremovable Clasp. Closing the clasp is easy if you understand how this exclusive sisterhook system works. Basically, all you need to do is pass one side of the two sisterhook arms through the plate opening at one end, and then squeeze the two ends closed. Just make sure they're completely overlapped. To see how this is done, please see this How-to-Page.

When the Unremovable Clasp and Rings might be broken, we offer an alternative solution that eliminates the unremovable clasp entirely. Instead, an "All Jump-Ring Construction" uses only super heavy jump rings that can't be bent or broken. This is for patients that will not tolerate wearing a bracelet and have the strength and will to forcibly break the clasp/rings. This alternative solution requires a caregiver being capable of using 2 pliers to close the jump ring on the patients' wrist, or go to a jeweler. This is a permanent closure that can only be opened using pliers. It also requires using our heaviest bracelets such as Italiana 60862, Maestros Magic 60994 and Catena Dura 62207. Call 847-638-2223 to discuss.

Save money with our unique unremovable clasp sets 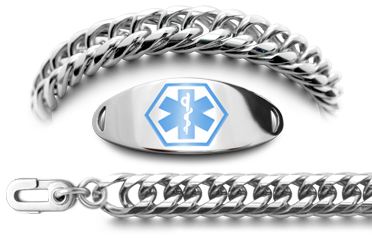 Get a safe return

When there's concern for a wandering loved one's safety so they're never lost—put the medical bracelet on the writing hand to prevent removal. See Beginners Guide

What to expect in real world emergencies

Paramedics look to the wrists first because along with the police, they are trained to always check the wrists first for a medical bracelet. So make sure it's attached firmly and with all critical medical information for proper care.
With only seconds to save a life, doctors and paramedics have no time for phone calls in a "medical emergency". They must decide quickly what can and can't be done on the spot. Only in "non-medical emergencies" will police make calls.
Must be worn 24/7 and withstand water conditions such as chlorine or salt water. This means a stainless steel medical bracelet is the best choice. Avoid beaded bracelets for Autism patients.
If you are the “ICE” number recipient, make sure you have a Med info card that lists all medical issues for loved ones, so when called, you can provide fast, useful help. 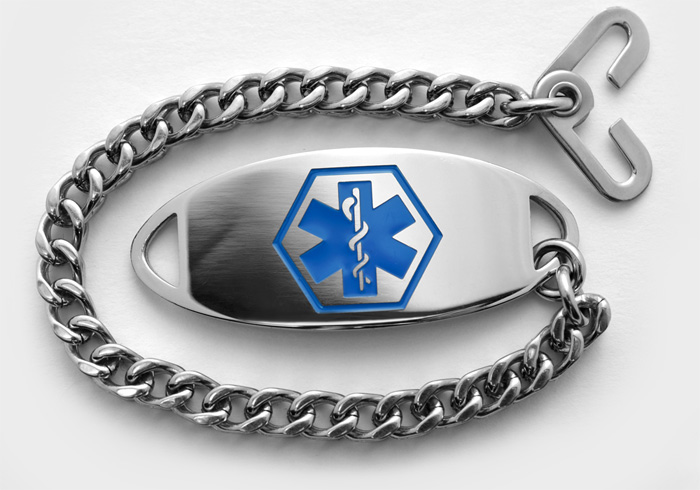 How to deal with Autism

At an early age, introduce this bracelet so they get used to wearing one, and they'll be less inclined to remove it later on.
Get one they'll like to wear.
Something that sparkles, is shiny and has a captivating pattern—whatever is interesting. See Autism Sets
Measure carefully and follow our specific directions: How to Size. We need a skintight measurement as a baseline to which we add the correct comfort space. The object is for the bracelet to be comfortable, but snug so it can't be pulled off over the hand.
Unremovable clasp design requires 2 hands to open which prevents the Autism patient from easily removing the bracelet. Electronic bracelets and pendants can't match this safety feature.

Autism is a disorder that manifests itself with a wide range of problems including poor social skills, repetitive behaviors and sometimes being nonverbal. Because there are so many different behaviors, the term “spectrum” is used. So it's now referred to as “autism spectrum disorder” or ASD. 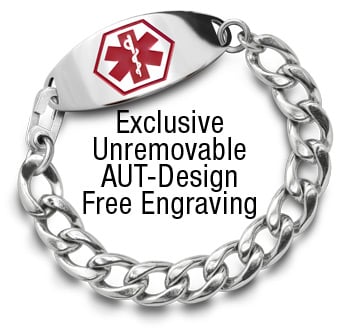 in the USA have some form of ASD with varied intellectual problems. These children and the autism community often have other health issues associated with this disorder.

People with autism show difficulty in social interactions such as avoiding eye contact, they're unresponsive to their name, they prefer to be alone, monotone speech, repetitive speech or actions, obsessive and compulsive behaviors. They often have difficulty dealing with unexpected changes to routines.

Genetics and environment affect how ASD develops. A number of genes are associated with the disorder suggesting it’s a result of some form of brain disruptions. Recently rates of autism have increased with no adequate explanation. Research shows that autism is more common in children born prematurely. Almost 30% of children develop epilepsy by the time they become adults.

ASD is goes across all racial and ethnic groups and economic levels. Boys are impacted much higher than girls.

While autism is associated with children because that’s when they are diagnosed, these children grow up to be adults and face many obstacles within our society. Some more serious cases are institutionalized, while others can be integrated into society and can perform all daily activities. Some require daily caregivers, and others can only go out into society through outpatient facilities.